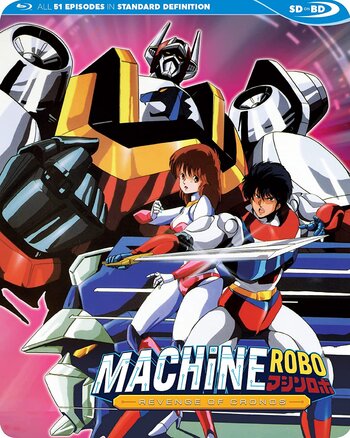 Machine Robo (マシンロボ) is a Long-Running toy-based franchise produced by toy company Bandai. It debuted in 1982 in Japan and initially ended in 1989. It was revived several times, and its latest incarnation, Machine Robo Mugenbine, is still being released today. A large portion of the Machine Robo toy-line was exported and sold by Tonka in America as GoBots and Rock Lords, sometimes with major color and mold changes, together with toys developed by Tonka themselves.

Several anime series were produced for it:

Machine Robo: Revenge of Cronos (マシンロボ クロノスの大逆襲) is a Japanese anime television series produced by Ashi Productionsnote with cooperation from AIC, Trans Arts, Kaname Productions and MD Geist company Production Wave for several episodes. It ran on TV Tokyo from July 3, 1986, through May 28, 1987. Initially, the only western releases were three subtitled DVDs with only 15 episodes released in 2003 by Central Park Media, until Discotek Media announced their licensing of the show for their own release in 2022.

The story of Revenge of Chronos takes place on the mechanical world of Cronos. A band of villains called the Gyandlar have come to the planet in search of the mythical energy, the Hyribead. Rom Stoll is the successor of the Tenkuu Chushinken sword technique after the death of his father in the first episode, kicking the plot. Rom, Drill, Jet and Leina ( Rom's sister ) fights again Devil Satan 6, Diondola and their minions to free their planet.

When the series left off, Rom and Leina had crossed a dimensional barrier. Their physical forms changed from robot to human and they were separated with blurred memories. Leina Stol is incarnated as Reina Haruka, a Japanese schoolgirl. As the story progresses, she meets up with Rod Drill, Blue Jet, Triple Jim, and Rom; all of whom are now human. This story is told in "Leina Stoll in Wolf Sword Legend"

This was followed by Machine Robo: Battlehackers (マシンロボ ぶっちぎりバトルハッカーズ), a loose sequel to Machine Robo: Revenge of Cronos, which aired in 1987. This series initially wasn't licensed for a Western release at all, but Discotek confirmed in 2022 that they'd be following up their release of Revenge of Cronos with the first-ever English release of this series later in 2022.

Furthermore, three OVAs were produced under the title "Leina Stoll in Wolf Sword Legend" from 1988 to 1990 that told the further story of Rom Stol and his sister (especially his sister), Blue Jet, Rod Drill, and Tripple Jim.

2003 saw the release of Machine Robo Rescue (出撃!マシンロボレスキュー), a Rescue show which told the feats of a rescue organisation and its Machine Robo helpers. All of the rescuers are kids because the Machine Robos synchronize especially well with kids aged 10-12. This is especially bad since artificial disasters are being caused by a mysterious organization, pushing both the kids and their robots to the limit in order to save lives and thwart the evil.

Although its current incarnation Machine Robo Mugenbine (マシンロボムゲンバイン) does not feature an anime, several CG shorts and a manga were produced, and the current releases feature a story on the boxes.

Both Revenge of Cronos and Battle Hackers provides examples of: