Anime / Legend of the Gold of Babylon 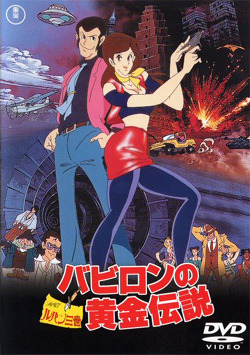 Legend of the Gold of Babylonnote  (ルパン三世 バビロンの黄金伝説 – Rupan Sansei - Babiron no Ogon Densetsu), first released into Japanese cinemas on July 13th 1985, is the third Lupin III animated theatrical feature, co-directed by Seijun Suzuki and Shigetsugu Yoshida. It is the only theatrical representation of the "Pink Jacket" era.

The movie opens in New York City: Lupin and his crew this time are after a legendary treasure, the Gold of Babylon, which is also craved by the son of the man who first discovered the Gold, Marciano, boss of the New York mafia. Furthermore, Zenigata has been roped into judging the "Miss ICPO Beauty Contest" and must now drag a group of nominees around with him, all eager to prove themselves as agents. Aided by his team, a set of stone tablets and a drunken old crone named Rosetta, Lupin sets his eyes on the treasure. But what's really the link between the Gold of Babylon and New York?

The film actually has a very interesting production history. Originally, series veteran (and The Castle of Cagliostro director) Hayao Miyazaki had been approached to direct, but declined due to a combination of being too engaged with his own projects with Studio Ghibli and having lost interest in the franchise over the years. The next person to sit in the director's chair was a young Mamoru Oshii (yes, THAT Oshii), recently booted off Urusei Yatsura, who wanted the film to be about Lupin "stealing fiction itself". Oshii ended up being fired from the project, but many of his ideas were later re-used in his own films such as Angel's Egg (which came out the same year). The film was then passed to a few other directors, before reaching Suzuki, someone who had directed a few episodes of the series, but was mostly known for cult films.

It was released on VHS back in the 90's by AnimEigo as Rupan III: Legend of the Gold of Babylon. Discotek Media announced a license rescue in 2009 but then never released it …until 2018, when they finally put the film out on Blu-ray complete with an English dub by the surviving "Red Jacket" cast (who had already been reunited to dub Part IV "Blue Jacket").

Alternative Title(s): Lupin III Legend Of The Gold Of Babylon