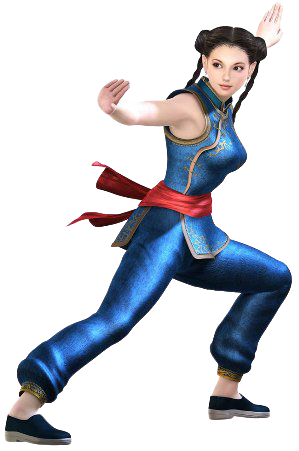 "And when I get excited
My little China girl says
Oh baby, you just shut your mouth, she says..."
— Iggy Pop, "China Girl" (Covered Up by David Bowie)
Advertisement:

A cute Chinese girl, usually with a variable accent. Nearly guaranteed to dress at some point in a qipao (or, almost as often, a tangzhuang) and has Odango Hair. A very high proportion (even for anime) will know martial arts, always in a Chinese style. Most of them will be called Lanhua (more often spelled Ranpha in merchandise), Meiling (sometimes Mei Lin), or some other popular name, even though there are many options for Chinese names.

This trope dates back to the Sino-Japanese war when Chinese women were highly exoticised and sexualised by Japanese men. It re-emerged in the 1970s although now as more "innocuous" portrayals when Japan had a boom of interest in Chinese culture due to improving relations between China and Japan, as well as the dominance of Hong Kong cinema in Eastern Asia.

In Anime and Manga the Chinese are a special case to the usual But Not Too Foreign treatment of foreigners, due to the long-running rivalry (historically exploding into outright war more than once) between China and Japan. Hong Kong is in a weird place in the middle (culturally, if not geographically), usually used when the writers want to set a story in a Vice City that wouldn't work properly otherwise.

Evil Chinese girls grow up to be Dragon Ladies. Or they might have a change of heart after years of helping their evil mad scientist fathers.

A subtrope of Stereotypes of Chinese People.