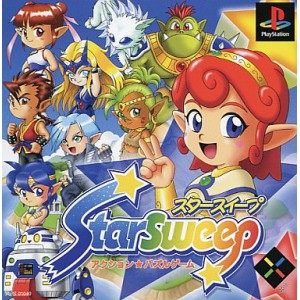 Star Sweep (aka Puzzle Star Sweep) is a Puzzle Game published by Axela. In the vein of Panel de Pon, you match up the stars on these 3x1 blocks called "star blocks," and lose if your stack reaches the top. You can make combos and chains to produce obstacles to hinder your opponent.

There were Arcade Game, Game Boy and PlayStation versions, but the former two never reached Western shores. The PlayStation version, on the other hand, received two completely separate localisations - one by Midas for Europe, and one by Agetec for the US.

Not to be confused with Twinkle Star Sprites or Star Ocean.