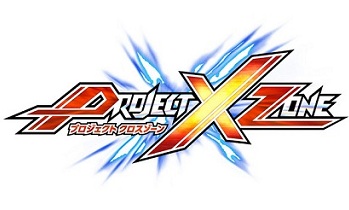 Project X Zone (pronounced Project Cross Zone) is a Turn-Based Strategy Massively Multiplayer Crossover game for the Nintendo 3DS console, featuring characters from the companies Capcom, Bandai Namco Entertainment and Sega (and later Nintendo in the sequel) and co-developed by Monolith Soft and Banpresto. It is a Spiritual Successor (and an outright sequel, plot-wise) to Namco × Capcom, and a side story to Super Robot Wars: Original Generation as a whole.

Just like in Namco X Capcom, you move characters around a field, casting skills and spirit commands for buffs while hunting for items and objectives, and switch to a fighting game screen to attack the enemy. The fighting engine seems to be closer to the Endless Frontier games. The main playable characters are paired off into units of two, performing pre-made Combination Attack strings at your command, while solo characters can be attached to each unit for support attacks.

The opening is animated by Studio TRIGGER, formed from former Studio Gainax employees, who would later go on to make Kill la Kill.

The complete game was released in stores and the eShop June 25th, 2013.

Mooks and Rival Characters
Note: The asterisk marks characters who later join as Solo Units or just plain join with you.