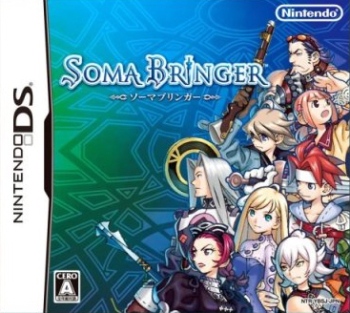 Soma Bringer is an Action RPG for the Nintendo DS developed by Monolith Soft (of Xenosaga fame) and published by Nintendo.
Advertisement:

In a world where the magical energy source known as Soma drives the technology and daily lives of all its inhabitants, there lies a huge continent named Barnea. In recent years, the natural balance of Soma has been disrupted by the arrival of mysterious beings called Visitors. To investigate these occurrences, Secundady - the organization that regulates Soma in the world, creates a military division to deal with these Visitors - Pharzuph. The story follows the seven members of the 7th Division of Pharzuph. What they discover on one of their missions will determine the fate of the world...