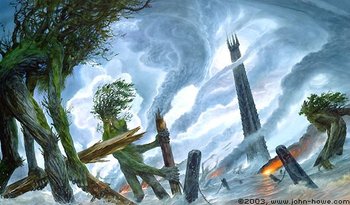 "To Isengard with DOOM we come."
"Mammals, a day of reckoning is coming. That's right, the same plants and flowers that saw you crawl from the primordial soup will reclaim the planet. And there will be no one to protect you."
— Poison Ivy, Batman & Robin
Advertisement:

Oh great, now humanity has done it. We aren't just jerks, but we've gone and messed up the planet: environmental pollution, wars, negative karmic vibes, etc. Our development has become a Game-Breaker in the whole "survival of the fittest" thing, so humans are now alien to the planet that birthed us. (This also suggests that every other living species exists in some kind of Hive Mind state, so everything they do for survival follows "the rules.") Unlike in a case of Gaia's Lament, where Gaia is sad and depressed at what's happened and wallowing in self-pity, we aren't getting off easy this time. In this case, she's mad as hell and isn't gonna take it anymore. Nature is definitely not a toy.

This has resulted in a situation where Mother Earth has sicced her champions on us. This will result in either a bunch of ethnically diverse kids learning how to recycle while a hero beats up really idiotic and shallow villains... or Eldritch Abominations that are programmed to wipe out the infection; i.e., humankind.

Any metaphor for the destruction that environmental damage can cause will do, because really, what aesop can't be delivered through the metaphor of "If you do this, someone or something will beat the crap out of you?" In better series, this will be a logical effect of a certain action; in worse ones, this will just be a flat-out "Science Is Bad!"

If intelligent, Gaia's Vengeance can have contradictory assessments of humanity. Predators and parasites who kill are simply following their nature, but on the other hand, humans "should know better" yet shouldn't think themselves different from said animals.

We can divide this trope threefold:

May be the reason for Absent Aliens; i.e., when they get too technologically advanced, they wipe themselves out, or their equivalent of Gaia does it.

The "Gaia's Avenger" variant is a fairly common Police Procedural plot, particularly for shows trying to strike a balance between left-wing and right-wing villain politics. Law & Order, NCIS, CSI: NY, and Criminal Minds have all tackled eco-terrorist bombers who saw themselves this way.

Compare The Scourge of God, Green Aesop, Gaia's Lament, Nature Spirit, Eco-Terrorist, Upsetting the Balance, and Global Warming. Often a Space Whale Aesop. May be a time When Trees Attack. May be the motivation behind a Transflormation. Clock Roaches are this for Father Time.