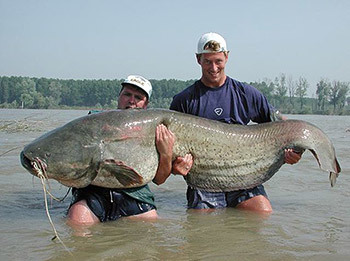 "...and then I saw
that from his lower lip
...hung five old pieces of fish-line,
...A green line, frayed at the end
where he broke it, two heavier lines,
and a fine black thread
still crimped from the strain and snap
when it broke and he got away.
Like medals with their ribbons
frayed and wavering,
a five-haired beard of wisdom
trailing from his aching jaw."
— Elizabeth Bishop, "The Fish"
Advertisement:

These are those legendary giant fish that inhabit certain lakes, as much a part of the local folklore as of the local wildlife. They have names like "Bubba" or "Sherman", and are usually literal catfish, although any large game fish like trout, sturgeon or pike (or some other aquatic animal, in a pinch) will do. They each have a story on how they're old as the lake itself, big as a bus, and almost impossible to catch.

That almost part is important. The protagonist will inevitably be encouraged to go out and be the One to Catch Said Giant Fish. Eventually he does so and he has a huge battle with it. Finally the protagonist wins the fight and the great fish gives in. Inevitably, the protagonist lets the fish go; usually he says that "the legend must live on" or makes up some other excuse.

Several shows will have a whole episode about an evil vicious Catfish, focusing on the pursuit of a game fish that should be easy prey, but which will inevitably turn into a Moby-Dick-style hunt. If you've got at least one character around who's sworn to kill or die trying, and who reacts to mention of the Catfish like Captain Ahab to mention of Moby Dick, you're probably dealing with this trope.

Sometimes a non-fish, terrestrial game animal, be it a squirrel or a deer, will be used in this manner, giving someone far more trouble than it should for the kind of game animal it is. This is fairly rare, however — there is a very strong tendency for this trope to focus on things that live in the water.

Bonus points if catching it requires the use of your own flesh as live bait.

The central character in a Fish Story.

Note that not all catfish, or fish, in fiction are the Catfish, and not all examples of the Catfish are literal catfish. That said, in the places where catfish are common, they are well known for attempting to eat anything they can swallow, growing to enormous size given enough food, driving out other fish, and being extremely difficult to kill.

Truth in Television, at least in Eurasia. Look up the "wels catfish,"

also called a "sheatfish". They can be up to 15 ft long (5 m) and weigh 675 lbs (305 kg). They eat ducks, and may have inspired the idea of the Loch Ness Monster. They also tend to be found in shockingly small bodies of water due to a fondness for hunting in shallows where they can sit in the current and vacuum up everything vaguely food-like.

Not to be confused with being catfished.