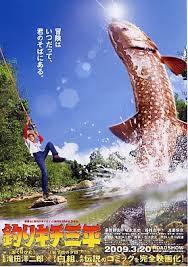 Sanpei Mihira is your average country boy, happily fishing away his days with his friend Yurippe. His grandfather, Ippei Mihira, is a renowned rod-maker who spends his days tending to his fields and teaching the boy how to fish. One day while fishing for trout in the local river, Sanpei bumps into Gyoushin Ayukawa, a pro fisherman who is looking for Ippei. It turns out that he is looking for the fabled Yonakidani, a fishing spot that Ippei ostensibly knows. To make matters worse, Sanpei's sister Aiko arrives a few days later to bring the boy to Tokyo for better education. In the midst of all this, Ippei finally made his decision and tells Gyoushin that he would like to fish in the aforementioned valley, asking Gyoushin to take them there. Not to mention that small bet he and Aiko made earlier...

Sanpei The Fisher Boy (釣りキチ三平, Tsurikichi Sanpei) is a 2009 movie based off the 1973-84 Shonen Magazine manga of the same name written by Takao Yaguchi. It has previously been turned into a 109 episode cartoon series in 1980 by Nippon Animation.