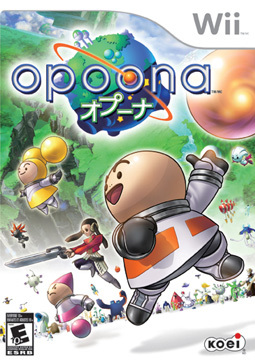 An Eastern RPG, developed by Arte Piazza and published by Koei for the Nintendo Wii in 2008. Touted as a "Lifestyle RPG", Opoona follows the titular character, whose family is traveling to the planet Landroll for a vacation. However they are attacked en-route by an unknown force. Their ship is destroyed, and the family scattered across the planet Landroll. When he awakens, Opoona is informed that his parents are hospitalized, and will require extensive matia to heal. The currency of the planet, matia also can be used for powerful healing magic. And so Opoona decides to work on Landroll to make enough money to heal his parents.

As a Tizian, the galaxy's strongest warrior species, Opoona is naturally suited to the Landroll Rangers, a group whose duty is to fight against Rogues, strange creatures from the dark side of the planet. Landroll is an unusual planet in that it has no night and day cycle. An impact in the past left half in constant light, and half in perpetual darkness. And it's from this side that the Rogues come. And so, as both a ranger and many secondary jobs, Opoona begins his work on Landroll.

The battle system is turn-based in design, but plays out in real time. Each attack decreases the user's energy, which has a maximum of 100, and they must then wait until it refills to attack again. The energy bon bon is thrown using the control stick, allowing the curve and force of the throw to be aimed. The longer it's held, the stronger and faster the throw, but also the longer it takes to refill the users energy. Each fight has a time limit of about 2 minutes, with longer limits for bosses, after which time the battle will end. This is said to be due to the unusual energy system which the Tizians use in battle.

One of the game's most striking features is how much attention has been paid to the setting. Each of the many domes which make up Landroll's civilization are vast and unique, with a distinct niche in the Landroll economy. The game also contains dozens of hidden pieces of artwork, including paintings and sculptures, in a range of styles. The game includes details on the history of each piece and its creator, many by the same artists, as well as the various movements which led to their creation. As well as many shows which can be watched via the Net TV. They include a wide-range of programs which vary by region. The game truly lives up to its description, creating a rich and immersive society to discover. Basically, plenty of Narrative Filigree abound.

Outside of this game, Opoona himself has also appeared as a playable character in Warriors All-Stars.