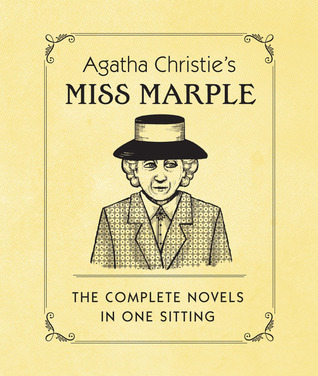 Miss Marple is, after Hercule Poirot, the second of Agatha Christie's big two detective characters. She was second to Poirot both chronologically, making her debut seven years after him, and in the affections of the public, but it is reported that of the two of them Christie herself much preferred Miss Marple.
Advertisement:

She made her first appearance in the short story "The Tuesday Night Club" in 1927, and first featured in a novel in 1930, with The Murder at the Vicarage. In all, she appeared in 12 novels and 24 short stories.

Miss Jane Marple is a little old spinster lady living in the English village of St Mary Mead, with an occasional tendency to stumble into murder mysteries. Her gently ultra-conventional exterior hides a keen perception and wide-ranging understanding of human nature from which she gains insight that lets her proceed where the official detectives are baffled. The kicker is that this wisdom is derived entirely from her observation of one village's life; confronted with a horrific murder, she invariably can draw the 'village parallel' between the suspects' behaviour and some random schoolboy prank or irregularity with the church funds. ("Human nature is much the same everywhere, I find...") This makes her the Trope Codifier for Little Old Lady Investigates.

Miss Marple's first screen adaptation was in 1961, when she was portrayed by Margaret Rutherford in four films beginning in that year. The films are well regarded as comedies, if not as adaptations. Only the first was even based on one of Christie's Miss Marple novels, and that not very closely. Also, Margaret Rutherford is the polar opposite of the sweet old lady of the novels, playing the character as essentially herself: burly, resolute and outspoken. Miss Marple has also been portrayed on film by Angela Lansbury in The Mirror Crack'd, who later went on to feature in another Little Old Lady Investigates role in Murder, She Wrote — which itself owes a huge debt to the Marple mythos, in particular the small-town setting.

One of Helen Hayes' last films was a TV adaptation of a Miss Marple novel—one of the few instances in which the actress was the right age, or even a little too old.

Of several television adaptations, the most faithful and best regarded is the BBC's Miss Marple series (1984-1992) of telefilms, starring Joan Hickson. More recently, ITV's Marple starring Geraldine McEwan and Julia McKenzie (2004-2013) is a much looser adaptation.

Other stories and novels
BBC series