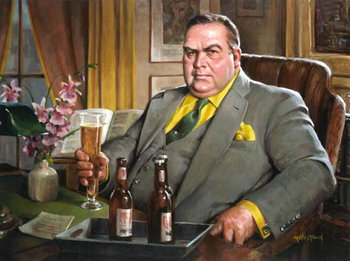 Nero Wolfe, hard at work.
Nothing is simpler than to kill a man. The difficulties arise in attempting to avoid the consequences.
—Nero Wolfe, Too Many Cooks
Advertisement:

A series of 33 novels and 39 short stories by Rex Stout, beloved for their unique blending of the classic and hardboiled mystery genres.

Brilliant, eccentric cynic Nero Wolfe makes his living as New York City's finest private detective. He charges outrageous fees, usually in the tens of thousands, to solve the highest-profile murders — because, quite frankly, he needs the money. After an adventurous youth in his native Montenegro, he's now fully engaged in the pursuit of self-indulgence, weighing in at "a seventh of a ton"note  285 pounds ('to insulate my feelings,' he explains). He literally refuses to leave his home on business — or most anything else, for that matter — and has seen to it that there's little reason why he should.

Renowned Swiss chef Fritz Brenner caters to his gastronomic obsessions; botanist Theodore Horstmann helps nurse the 10,000+ orchids in the rooftop greenhouse; and Archie Goodwin, our narrator, acts as his legman, secretary, bodyguard, occasional chauffeur and general sounding-board. A gifted investigator in his own right, Archie is the one who goes out and finds the suspects, collects the clues and romances the ladies, while Wolfe uses his keen intellect to piece it all together and collect the fee. (Although under some circumstances, usually touching pride - as when a woman was strangled in the office with Wolfe's own necktie - honour demands they solve a case regardless of client or funding.)

The enduring charm of the series lies in the meeting of their two worlds: 'a recurring miracle', as Wolfe once put it. Archie looks, fights and speaks fluent Dashiell Hammett with a deft, self-aware touch all his own, and is actually much more likely to out-talk opponents than physically intimidate them ("by God, you'd clown at your own funeral!"). True to his Midwestern roots, he unwinds with a tall glass of milk and often shocks Wolfe by skipping a gourmet dinner for a deli sandwich while on a case. He refuses to be intimidated by anyone, let alone his formidable employer... which is understandable, given that his main duty is to irritate Wolfe out of his cushy routine and into taking cases in the first place.

Wolfe, on the other hand, represents the 'drawing-room' mystery taken to its logical ultimate, right up to the climactic gathering of suspects to name the culprit. Within his plush, book-lined Manhattan brownstone he has evolved a lifestyle that has refined hedonism to the most exquisite routine — breakfast in bed, visits to the orchids from nine to eleven and four to six without fail, no talking business at meals, etc. etc. — and tolerates no interruptions, not even from the police. He is all intellect, quite openly misogynistic, seemingly immune to any human passion whatsoever... save perhaps in regards to his trust in Archie, which is absolute.

Supporting cast includes freelance investigators Saul Panzer, Fred Durkin and Orrie Cather, often called in to work surveillance, IDs and other routine angles on a case; Archie's casual girlfriend, smarter-than-she-looks society dilettante Lily Rowan; and Lon Cohen, city editor of the Gazette, who trades inside info (and the occasional well-placed article) for scoops on the flashy murders that Wolfe solves. Inspector Cramer and Sergeant Purley Stebbins provide the main police presence, many steps up the competence ladder from Holmesian bobbies—and much more realistically resentful of a civilian wielding such power, but both aware that they can't do anything about it and cognizant of the times that Wolfe can get results by doing something they can't. A set of lesser law enforcement characters are less competent, more resentful, and pettier, trying to stop Wolfe or somehow catch him out.

A popular Epileptic Tree (created by science fiction author John D. Clark in the '50s, but never mentioned in canon) is that Wolfe's father was Sherlock Holmes, by Irene Adler of course; the combination of deductive genius, heavyset build and laziness does sound uncannily like the Great Detective's brother Mycroft. The Wold Newton Universe incorporated this theory. This is all sometimes extended to name Archie in turn as Wolfe's son or nephew, based off Wolfe's cryptic comment in one of the books: "If I were [a Negro], Mr. Goodwin would have to be one too." It's more likely that Wolfe was alluding to the fact that a white man would never accept a job as the assistant to a black man at the time the story was set, but that doesn't stop the speculation.

The Nero Wolfe stories has been adapted for radio, TV, and film. The 2001-2002 A&E series (technically titled A Nero Wolfe Mystery) is one of the more faithful adaptations, remaining firmly set in the amorphous mid-40's-to-60's of the books while lifting large portions of Archie's narration directly from the text. The show was notable for its approach to guest casting — one-shot characters would be played by the same core group of actors, much like a repertory theater, so that the murder victim one episode might be the murderer the next.

These mystery novels provide examples of: