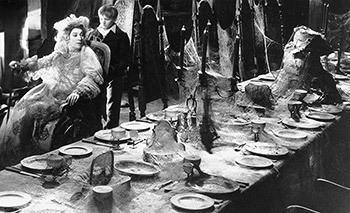 One of the earliest shut-ins.
Advertisement:

It's not the least bit uncommon for people to avoid going outside in Real Life, and fiction follows through by giving us an assortment of house hermit characters. They tend to come in three flavors:

Since most fictional characters need to eat to live, shut-ins who are still ambulatory and aren't captives may go outside to buy the most necessary of supplies, but otherwise remain in isolation.

Compare The Hermit, Reclusive Artist, and Crazy Survivalist. Compare and contrast You Are Grounded!, which is typically short and doesn't include school. NPC Scheduling, especially in older games, may make characters look like shut-ins, but that's just due to the simplistic AI. Compare Convenient Coma and the like, where being a shut-in is merely a side effect of being unconscious and therefore completely incapable of going anywhere. Prisoners and rare cases like Truman who are prisoners in wide-open spaces don't really count, as they still have interactions with peers of their social standing within their microcosm. Prisoners in solitary tend to fall under Go Mad from the Isolation and/or Punishment Box.