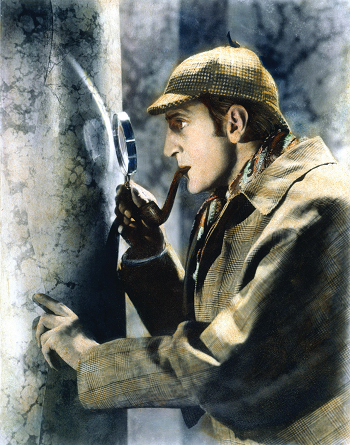 The game is afoot.
"I never guess. It is a shocking habit — destructive to the logical faculty."
— Sherlock Holmes, The Sign of the Four
Advertisement:

A staple of Mystery Fiction and Detective Fiction, the Great Detective relies on powers of deduction and educated thought to solve crimes. The Great Detective is usually an Amateur Sleuth or a Private Detective (because Police Are Useless). Some of these detectives will have an Arch-Enemy that will be their equal, but in a different light.

The Great Detective tradition originates with Eugène François Vidocq, a Real Life criminal-turned-detective and founder of the French Sûreté in the early 19th century. Vidocq pioneered many of the scientific methods of detective work which would later become common in fictional detective stories.

The first Great Detective in fiction was Edgar Allan Poe's C. Auguste Dupin. Poe rejected the Vidocq model in favor of a more fantastic kind of detective. Later, the Dupin model was further codified by Arthur Conan Doyle's Sherlock Holmes, the most famous example to this day. As such, the Sherlock Homage tends to be this in either pastiche or parody form, and many (though certainly not all) Great Detectives tend to at least nod to Holmes in some form.

In Japan, where the Golden Age of detective fiction never quite ended, this type of character is called "Meitantei".

Compare: Hardboiled Detective, Little Old Lady Investigates, and Inspector Lestrade (whose greatness extends only to the evidence he gets). Contrast with Clueless Detective. Often opposed by a Gentleman and/or Phantom Thief.

Will often be accompanied by The Watson as an Audience Surrogate. Not uncommon for him to have natural defects.