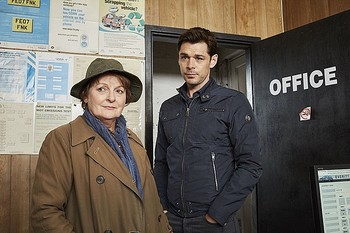 The Lead Police Detective is a plain clothes police officer who serves as the chief investigator and (often) protagonist of the story. They report to Da Chief, but have, at minimum, one subordinate (in many television series, this is a younger partner) who often acts as The Watson for them. This character has just enough rank to order people around, and not enough to justify spending all their time in HQ. Instead of sitting in at his desk directing entire units, he will be out and about investigating crime scenes and interviewing witnesses himself.

In Long-Runners, the character may be promoted to Da Chief or retire, prompting their partner (or a completely new character) to replace their role as Inspector. Both the Inspector and Da Chief can be compared to The Captain, the military equivalent. Depending on the story, the Lead Police Detective may have a large team of subordinates who are there primarily to show they have rank.

Contrast with the Private Detective and the Amateur Sleuth, who also do investigations but are not part of a police force.