Literature / Master of the World 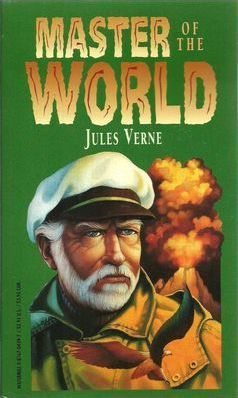 A 1904 thriller by Jules Verne, serving as a Stealth Sequel to Verne's earlier novel Robur the Conqueror. A mysterious "something" is causing explosions and mysterious lights at the top of a mountain in North Carolina called the Great Eyrie, near the town of Morganton.
Advertisement:

Morganton's Mayor Elias Smith is understandably worried and turns to the federal government for assistance. Chief Inspector John Strock is sent from Washington to get to the bottom of things. Or, rather, the top. Of the Eyrie, that is. He, Smith and some guides make a failed attempt to scale the pinnacle and have to return empty handed. What is up there? Strock returns to Washington and receives a threatening letter, posted from Morganton, warning him to stay away from the Eyrie. The writer is identified only by the initials "M.O.W."

Strock's superior Mr. Ward assigns him to another, seemingly unrelated case. It seems someone calling himself the "Master of the World" has been terrorizing the country using a "tri-phibian" vehicle called the Terror, which can, at will, go on land as a car, in the sea as a submarine and in the air as an airship, transforming effortlessly between all three. It's going to be Strock's job to discover who is doing this and why. He quickly makes the connection between this vehicle and the incident at the Eyrie, realizing it was the Terror's commander who threatened him.

An attempt to arrest the crew of the Terror near Lake Erie ends with one of Strock's men wounded by gunfire, and Strock himself tangled in the mooring line and dragged after the escaping Terror when its crew flees the authorities. Strock blacks out and thinks he has drowned... only to later awaken safe and sound in a cabin on board, having been rescued by the criminals for some unknown reason. But now he is a prisoner on board the mysterious vessel! Who is the Terror's mysterious inventor and commander, and what dire plans does he have for the captive policeman?

It was adapted into a film starring Charles Bronson and Vincent Price.

Master of the World shows examples of the following tropes: