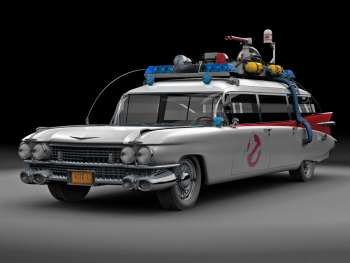 Only the best for the experienced ghost hunters.
"I want a car! Chicks dig the car."
— Robin, Batman & Robin
Advertisement:

Heroes need to be able to get to where the action is. And when they have to get from point "A" to point "B", no ordinary vehicle will do. The hero's ride has to be just as unique and awesome as the hero is. Enter a Cool Car!

It looks cool, it goes fast, it might be modified to go even faster, its engine can be expected to make the Most Wonderful Sound, it may even be bulletproof and contain an assortment of weapons and gadgets. A really Cool Car can fly.

Most Cool Cars, even ones that have no inherent super abilities, will be curiously immune to breakdown, physical damage or a realistic fuel range. No matter what manner it is in which the hero drives, as long as he's determined to stay on the straight and narrow and fight for the forces of good, his car shows an Empathic Weapon's ability to never get scratched, dented or even dirty. It may also be able to outperform similar or even superior vehicles simply by virtue of having the hero behind the wheel. Driving one also seems to ensure you'll have Rock Star Parking privileges. If you're really lucky, you'll have a Cool Garage to park it in.

Sometimes, the car is cool enough that it actually can become a protagonist in the series — e.g. KITT in Knight Rider and the General Lee in The Dukes of Hazzard are arguably the main protagonists of their respective shows and are as iconic to the audience as the human stars. A Car Song is where a Cool Car is the star of a song instead.

A Super-Trope to Pimped-Out Car, Weaponized Car, Hero's Classic Car (a classic car driven by The Hero). A Theme Mobile is a Cool Car that ties into the character's motif in some way (e.g. the Batmobile.)

Contrast The Alleged Car, as well as Rice Burner — but compare What a Piece of Junk. See Improbably Cool Car for cars that are just too cool for the setting or the characters, and Metallicar Syndrome for eye-catching vehicles driven by people who would be better off picking something less conspicuous.

As any car could be considered this in reality, No Real Life Examples, Please!

007's trademark Aston Martin DB5 was used in a race against an even cooler car, a Ferrari F355 GTS driven by Xenia. (In the words of the stunt coordinator, it's "a perfectly shaped, old and vulnerable vehicle and a racecar").

007's trademark Aston Martin DB5 was used in a race against an even cooler car, a Ferrari F355 GTS driven by Xenia. (In the words of the stunt coordinator, it's "a perfectly shaped, old and vulnerable vehicle and a racecar").