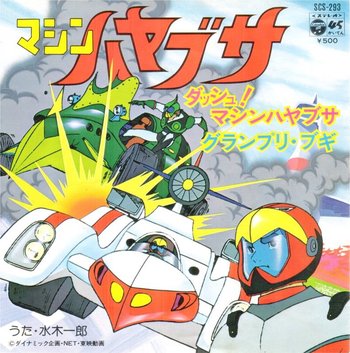 Machine Hayabusa note also known as "Dash! Machine Hayabusa" is an anime series produced by Toei Animation, comprised of a single season made of 21 episodes; it first aired in Japan in 1976. It revolves around the fight between two car racing teams: the Black Shadow, a shady organization leaded by the mysterious and ruthless Ayab Mobil Dick, controls the racing world while the heroic Saionji racing team, owned by eponymous Dr. Saionji, tries to contrast them.

The hero of the story is Ken Hayabusa, a young pilot that wishes to avenge the death of his father during a race. He becomes the ace of Team Saionji and, as such, he's entrusted the powerful Falcon, a revolutionary design machine thrusted by a jet engine. During the various races he's supported by the other four racers of the team and, later in the series, Saionji's younger sister Sakura.