Every Car Is a Pinto 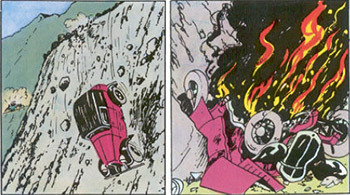 Well there goes the rental deposit...
"As everyone knows, cars are highly volatile machines, seemingly made of tissue paper, birch bark and lighter fluid. Or so you would think by how often, easily and massively they explode."
— WatchMojo, "Top 10 Worst Action Movie Clichés"

Any significant impact to a vehicle, particularly when falling off a cliff, will result in the vehicle exploding and/or immediately catching fire. Evidently fictional cars run on nitroglycerine. This trope comes from the public knowledge that vehicles are full of flammable substances like gasoline minus the less-public knowledge that liquid gasoline has to be vaporized and mixed with air at the proper ratio before a spark will ignite it. At worst your "exploding" car would actually be a car with a small fire. Needless to say, Rule of Cool is in full effect here.

While cars are the most common vehicle to go kaboom, it seems that any form of transport has a good chance of exploding in a huge ball of flames and debris if it's shot at or wrecked. Aircraft, locomotives, ships: pretty much anything gas-powered and motorized is a fireball waiting to happen. Sometimes vehicles tumbling off cliffs will burst into flames spontaneously, in midair, before they've even hit the ground.

Some pretty egregious instances might even have them mushroom. Expect it to intersect frequently with Dangerous Clifftop Road (as in the page image).

The Trope Namer is the now-infamous Ford Pinto,

a low-cost car launched by the Ford Motor Company in 1970. Its fatal flaw was that its gas tank was placed between the rear axle and the bumper — and the bumper itself was not sturdy — meaning that any damage to the car's back end could easily puncture the tank and spill fuel on the hot exhaust pipe. After several incidents when a Pinto burst into flames after a minor collision, its reputation as a cheap death trap was sealed, and it was taken off the market in 1980 to be replaced by the North American Ford Escortnote Which began based on the European Ford Escort mk3.

If the massive numbers of parodies (such as cars going poof at a touch, or things exploding that don't contain gas at all, like bicycles) and Lampshade Hangings in recent years is any indication, this is on its way to being a Discredited Trope, especially after MythBusters debunked it. Still, there are plenty of people who believe that any damaged car is inches from going up in flames, leading to well-meaning bystanders pulling injured persons out of their cars and causing further harm.

Subtrope of Artistic License – Explosives. Compare Made of Explodium, Hair-Trigger Explosive, Damage Is Fire. Molotov Truck is often a weaponized version of this. External Combustion combines this with Vehicular Sabotage. See also Shoot the Fuel Tank for a slightly more justified sub-trope.

Car chase ends in a crash

German truck hits the back of a Ford Pinto

My eyes! My eyes!

Car chase ends in a crash

German truck hits the back of a Ford Pinto

My eyes! My eyes!