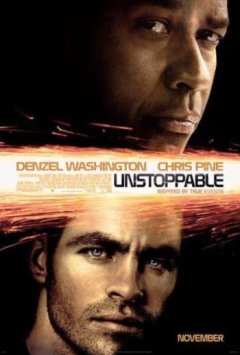 Well, those math problems just got a lot more exciting, in this case: Train A leaves Railyard A at 70 mph, with no one at the controls and carrying enough explosive chemicals to level a small town. How long will it take for the heroes to stop it before disaster strikes?

Unstoppable is a 2010 action film starring Denzel Washington, Chris Pine and Rosario Dawson, and directed by Tony Scott. It's got a fairly simple plot — a train loaded with hazardous chemicals loses its engineer and runs unmanned across rural Pennsylvania, and train engineers Frank Barnes (Washington) and Will Colson (Pine) have to stop it before it reaches a tight curve and derails in the middle of the large town of Stanton — which just so happens to be Will's hometown.