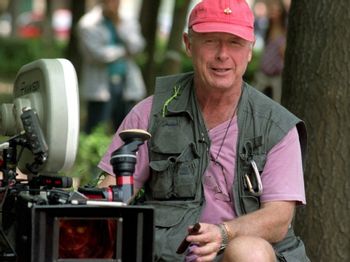 "The biggest edge I live on is directing. That's the scariest, most dangerous thing you can do in your life."
Advertisement:

He was best known for making films in the action genre, most notably Top Gun, The Last Boy Scout, True Romance, Crimson Tide, Spy Game and Man on Fire.

He was the younger brother of fellow filmmaker Ridley Scott. He tragically jumped off the the Vincent Thomas Bridge in Los Angeles, California, at age 68 on August 19, 2012, having been unable to deal with the pain of a cancer he was experiencing.

Tony Scott and his works provide examples of: