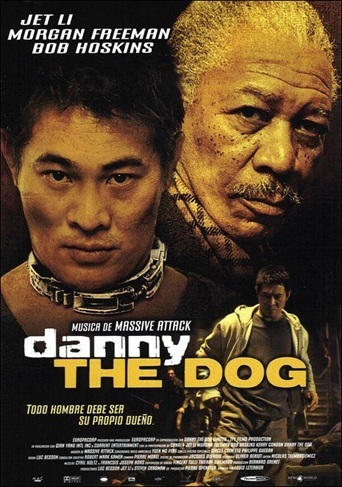 "You're a dog! You're my dog!"
"We've come to think of you as family, and that's what families do—they stick together."
Advertisement:

Danny the Dog (also known as Unleashed in some markets) is a 2005 action movie directed by Louis Leterrier, written by Luc Besson (of The Fifth Element fame), and starring Jet Li, Bob Hoskins, and Morgan Freeman.

Danny (Li) is a trained assassin, working as an enforcer for his "Uncle Bart" (Hoskins), a low-level gangster in Glasgow. He's kept like a dog in a crate under the floor and wearing a metal collar, conditioned to fight and kill on Bart's orders. When he survives a hit that leaves the gang dead, he stumbles into a blind piano tuner named Sam (Freeman) and his adopted daughter Victoria (Kerry Condon), who take him in and teach him to live like a human. But Bart isn't dead, and he wants Danny back.

Not to be confused with the death metal band of the same name.