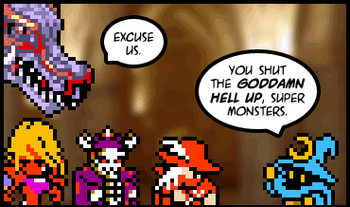 The kind of thing useless adults will say to a Kid Hero or child who has some rather urgent news. This pint-sized Cassandra will be shooed away from grownup company or harangued for being "Just a Kid" before even getting one word out. This isn't necessarily limited to just children either; a pretentious character can silence a friend or underling in this manner, or a grown woman when the men don't take women seriously. This can also be used as a put down to annoying characters when two more powerful/important characters are discussing something. The kid will get interrupted after the word "but".

Exasperatingly, the quieter may even scold the quietee later for not speaking up! In some cases, the victim will point out that no one was allowing them to speak, although most of the time, they don't even bother to point this out despite the fact that it would vindicate them. For even more frustration, the Very Important Grown-Up Things the grown-ups would much rather do or talk about might be completely asinine.

Usually, the very thing the child/friend/underling was trying to say turns out to be significant or important, and the hero will regret having brushed it off. In darker examples the brush-off leads the hero into greater danger by blundering directly into the situation he could've been aware of in advance; or worse, the person making the warning is put in grave danger (or killed) since he or she was asking for help.

Compare Rebuff the Amateur. Contrast Kid Has a Point.

If the kid in question is mistakenly thought to be dead, that's the subtrope Not Now, We're Too Busy Crying over You.