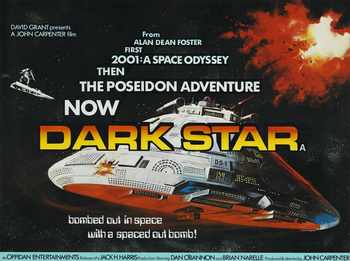 "They're not lost in space. They're loose!"
— Tagline for the trailer
Advertisement:

The film is about the small crew of the titular scout ship, whose job is to destroy unstable planets which might threaten future colonization, the antics they get up to during the monotonous boring gaps between bombing runs, and one of their doomsday bombs becoming self-aware.

Not to be confused with the video game featuring the cast of MST3K, the final level in Kirby 64: The Crystal Shards, the Grateful Dead song, or the Sealed Evil in a Can from Mario & Luigi: Bowser's Inside Story