Anime / Wish Upon the Pleiades 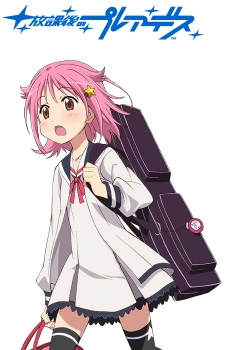 "You mean you can combine girls and Cars?"
Advertisement:

Subaru is a timid, clumsy girl who has always loved astronomy. One day, while wandering around her school, she stumbles upon a strange room and four magical girls: the elegant Itsuki, the brash Hikaru, the quiet Nanako and Aoi, a former friend who seems to be carrying a grudge. Subaru ends up wrapped in a quest to help the girls' "President," a small green alien who can only talk through Nanako, recover all of the pieces of his spaceship. But who is this strange red-haired boy who opposes them at every turn?

Houkago no Pleiades (literally After School Pleiades, but known in English as Wish Upon the Pleiades) is a 2011 Magical Girl original net animation. Born from a collaboration between Studio Gainax and Subaru — yes, the car manufacturer based in Gunma Prefecture note Subaru is the Japanese name for the star cluster known in the West as the Pleiades, which is featured in their corporate logo. — each episode is around 6 minutes long.

It is available for free on the Subaru x Gainax

A proper anime series with standard episode length started airing as part of Spring 2015 Anime season, which is currently available for streaming on Crunchyroll

. It is worth noting that due to Gainax shifting its focus to Fukushima Gainax (later acquired and reorganized as the similarly-named but legally distinct Gaina), this is probably the very last Studio Gainax TV production.

Tropes shared in both versions: