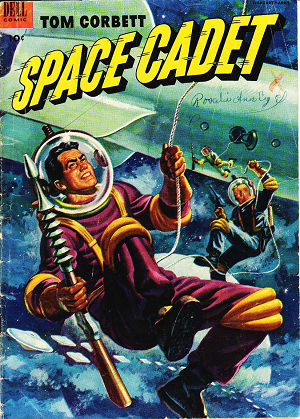 "And if I'm dismissed from service, who will defend planet Earth?"
"I believe Corbett is available."
"Tom Corbett?" said Proton in disbelief. "That space cadet!"
— Plan 7 of 9 from Outer Space
Advertisement:

For those of you who came here looking for the term's idiomatic meaning, that's a Cloudcuckoolander.

As for actual space cadets:

A Discredited Trope from the early Pulp Magazine days of media science fiction (peaked in the 1950's in movie serials and TV shows), involving a hero who was part of an organization that handles law and order in outer space, much like in a Western... in space. Frequently the titular Space Cadet was a child or teen who was a new recruit or a sidekick to an older hero. May be the equivalent of Walking the Earth with isolated outposts and frontier planets; especially strange when the Kid Hero seems not to have a family at home. His training place would be the Space Cadet Academy. His great goal in life is to someday become Captain Space, Defender of Earth!.