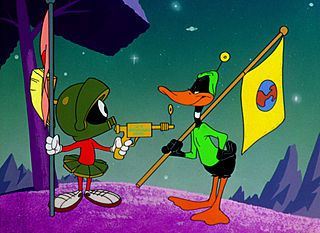 "Little does he realize that I have on my disintegration-proof vest. Ha ha ha. You may fire when ready, Grisly."
Duck Dodgers: I claim this planet in the name of the Earth!
Marvin the Martian: [lands his ship] I claim this planet in the name of Mars! Isn't that lovely, hmm?
Duck Dodgers: Look, bud, I've got news for you. I have already claimed this bit of dirt for the Earth. And there just ain't room enough on this planet for the two of us!
Marvin the Martian: [pulls his disintegrating pistol on Dodgers] I do believe you are right.
Advertisement:

"Duck Dodgers in the 24½th Century" (an obvious parody of Buck Rogers in the 25th Century) is a 1953 Chuck Jones-directed Merrie Melodies short featuring Daffy Duck as the eponymous Duck Dodgers, a cocky, spectacularly inept space hero who, with the help of an Eager Young Space Cadet played by Porky Pig, battles Marvin the Martian for control of Planet X, only known location of "Illudium Phosdex," the shaving cream atom.

Also an obvious send-up of the Cold War (whether or not it was intentional is unknown, but most modern viewers will interpret it as such), with Earth representing the United States and Mars ("the Red Planet") the Soviet Union. The escalation of their conflict is a perfect illustration of the doctrine of Mutually Assured Destruction.

The popularity of this short led to a number of subsequent Duck Dodgers adventures, including a Duck Dodgers cartoon series fifty years later and a video game titled Duck Dodgers Starring Daffy Duck.

This short made it on The Bugs Bunny/Road Runner Movie.

"Duck Dodgers in the 24½th Century" provide examples of:

Example of:
Had the Silly Thing in Reverse