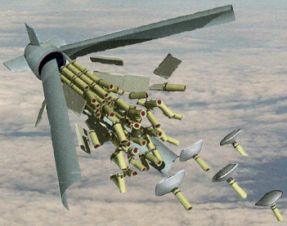 Just wait 'till you see what the little bombs split up into.
"Oh God. Even the bullets shoot bullets."
— Zeon_1992 (A Kongregate commenter) on the Cute 'em Up Bullet Hell game Bullet Heaven
Advertisement:

There's Abnormal Ammo for those cases when your weapons fire something unusual. But what if your weapon fires stuff... that also shoots projectiles of its own? That would be cool, right?

Recursive Ammo is what happens when ammunition for a certain weapon uses another level of weapons to do the dirty work. In Real Life, the secondary ordnance is called "sub-munitions". This does not include things such as fragmentation grenades, Attack Drones, or missiles with multiple thrusters that break away. Various forms of Real Life versions of these weapons will show up anytime someone decides to look up modern weapons.

Bullet Hell games in general tend to make use of this trope, as interesting patterns and changes of direction of bullets is their bread and butter.

Can be one of the three different types of Spread Shot and frequently a way to instigate Splash Damage. Sub-Trope of Abnormal Ammo and Matryoshka Object. See also Improvised Scattershot when this happens through external forces.