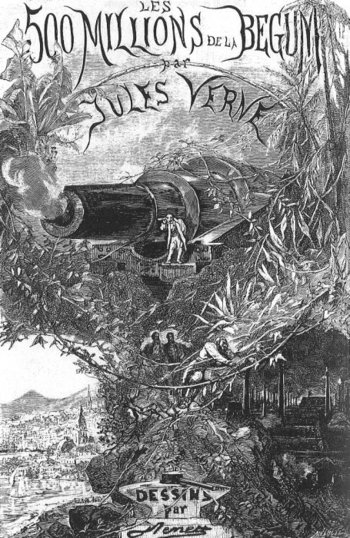 A 1879 Sci-Fi novel by the French author Jules Verne, The Begum's Millions, also published in English as The Begum's Fortune, or, in its original name, Les Cinq cents millions de la Bégum (Five Hundred Millions of the Begum), it marks a period in Verne's life, when his outlook started to turn progressively bleak, and Real Life started to write the plot. Written at the heels of the disastrous Franco-Prussian war (which Verne, as a staunch French nationalist, found difficult to stomach), the fall of the Second Empire, the ravages of the Paris Commune suppression and personally difficult period for the author, it doesn't really pull any satirical and propagandistic punches.

Plot
The novel's plot is relatively simple. A French adventurer, tired of his soldier-of-fortune exploits in India, decides to comfortably settle down by marrying a stupendously rich Indian princess (the Begum of the title), but come a few decades, and their lineage ends without an issue, so the Begum's enormous fortune (the titular half billion francs) passes to the adventurer's two distant relatives, and they cannot be more unlike each other. One is Dr. Sarrasin, a gentle French physician, dismayed at the state of public health of the time, and the other is his distant cousin, Prof. Schultze, an already wealthy German industrialist who has built his fortune on the arms production. Both men decide to use their share of inheritance to build an utopian city as each of them imagined it.

Both of them managing to lease large plots of land from the US state of Oregon (on the exterritorial terms not unlike of the Hong Kong lease)note Interestingly, the federal Congress wasn't mentioned by Verne at all., Dr. Sarrasin proceeded to build France-Ville, a modern, exemplary city with the emphasis on public health and healthy and sanitary living standards, while Prof. Schultze's Stahlstadt was an industrial powerhouse, built on the lines of militaristic discipline and split-second Prussian precision. Separated by the Cascades, both cities managed to happily ignore each other for several years. Not all is well, though, and the citizens of France-Ville become progressively suspicious of their militaristic neighbors, especially given Schultze's favorite racist rhetorics about superiority of the "Saxon" race over the "Latin" one, to which he was given even before his inheritance.

Cue Marcel Bruckmann, the novel's true protagonist and the childhood friend of Dr. Sarrasin's son Octave. The brave and patriotic Alsatian, still holding the grudge over his homeland annexation during the Franco-Prussian war, infiltrates the fortified and compartmentalized Stahlstadt (passing himself as a Swiss) and manages to rise in its para-military hierarchy high enough to be admitted into the mysterious Tower of the Bull, the center of Schultze's power. Just as he becomes an assistant to the fortress city's dictator himself, he learns of the terrible secret — yes, all those years Schultze did plan and prepared to destroy the Ville-France, and he planned to use Weapons Of Mass Destruction to do this — his plans were first to bombard the neighboring city with incendiary shells, and then freeze and suffocate what remained with gas shells filled with liquid carbon dioxide.

Marcel manages to warn his friends about this, but is discovered and has to hastily escape the city, and his warning was late anyway. Just as he returns to France-Ville, Schultze finishes his super-cannon and attempts to shell the city. Luckily, he was wrong in his calculation, and the cannon, instead of sending the shell some 40 miles into France-Ville, accidentally puts it into orbit. The heroes' city is saved, but knowing of the fate envisioned for them, its citizens begin to hastily militarize their previously peaceful city, before Schultze has the chance to repair his cannon and attack again, only to find that the attack doesn't come. Marcel and Octave, venturing to check what's going on, find an empty and desolate Stahlstadt, virtually left by its populace — an accidental explosion of Schultze's gas charge left him dead and frozen in his secret office, and because he ran his city as an absolute dictator, designating neither a heir, nor the deputy, it simply ground to a standstill without his orders. The heroes then return to their home city, deciding to utilize the Stalstadt industry to protect it from any future threats.

Aside from being basically an Author Tract and providing several Unbuilt Tropes, the novel is notable in that it is one of the very few Verne's collaborations published during his lifetime. note most of his posthumous novels were heavily edited or outright rewritten by his son Michel It comes from a manuscript by the Paris Commune official and exiled revolutionary Paschal Grousset, who was living in the US at the time and was in bad need of an income. Grousset sold his manuscript to Verne's publisher Hetzel, who felt that it would sell better under a different name and that it needed a serious editing anyway, so he passed it to Verne for a rework. Verne rewrote the draft as he saw fit, and Hetzel published it under his name. In fact, this arrangement was utilized several times more, until Grousset was pardoned and could return to France during the Third Republic. He then built his own literary career as a famous adventure writer Andre Laurie.

The novel provides the examples of: