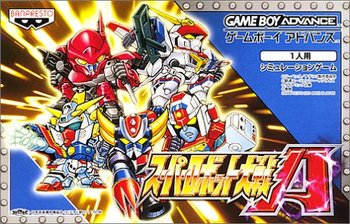 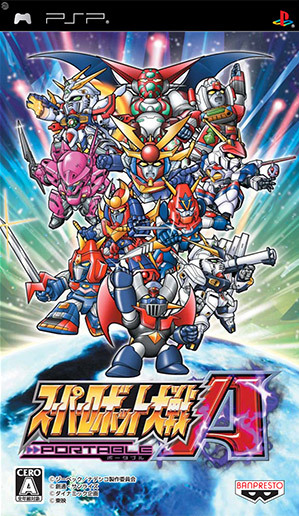 The first Super Robot Wars title for the Nintendo Game Boy Advance, Super Robot Wars Advance was released in 2001 and features some of the Nintendo Hard difficulty in the same vein of older SRWs, and borrows a lot of mechanical designs from Super Robot Wars 64. It is the only game in the franchise where shields are given a seperate Hit Points gauge. Unfortunately, like previous SRWs, Advance can't skip combat animations, which didn't sit quite too well for many fans.

In 2008, Advance was given a Video Game Remake for the Sony PlayStation Portable, titled Super Robot Wars A Portable (not Advance/Advanced Portable, since it's no longer on the Game Boy Advance), boasting Super Robot Wars Original Generations visuals, voice acting, modern gameplay mechanics (such as selectable pilot skills), skippable combat animations and many other improvements. Yet, the difficulty is taken Up to Eleven, thus fans are divided whether A Portable was a good remake or not.

The story revolves around the warmongering organization "Shadow-Mirror", who sends out one of its members to spy on an Alternate Universe before its primary force enters. Depending on the player, they can choose either the Shadow-Mirror's Ace Pilot Axel Almer or the newly created android of the W-Numbers series W-17, codenamed "Lamia Loveless". Unfortunately for them, due to a mess up in the interdimesional jump to another universe, they receive a certain misfortune (Easy Amnesia for Axel, Speech Impediment for Lamia) and actually align themselves with the heroes, thereby betraying the Shadow-Mirror.

A Fan Translation for A Portable has been released by Steel Soul.