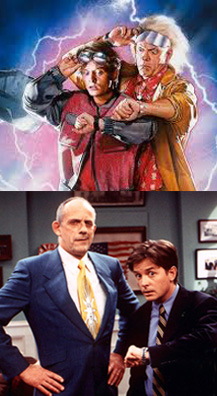 Coffee? Where we're going, we don't need coffee.
"The movie makes a sly reference to a famous earlier role by Irons. When Simba tells him, "You're so weird," he replies "You have no idea," in exactly the tone he used in Reversal of Fortune."
— Roger Ebert referring to

Jeremy Irons' role as Scar in The Lion King (1994).
Advertisement:

An Actor Allusion is the deliberate, yet typically rather isolated, throw-away references to previous works/roles of an actor in a work, say a joke or mannerism. The reference is unlikely to have much plot relevance, and is unlikely to be anything but a deliberate nod to the actor's previous work. Also note that it is for allusions to roles, not the actor themselves, with the equivalent being an Actor-Shared Background.

The exact nature of the allusion can vary, but tends to be either blink-and-you'll-miss-it or fairly blatant. To illustrate, say Alice played Nurse Beth in B Ward before going on to play Officer Cathy in C Division. A more subtle example of an Actor Allusion might be having "Officer Cathy" mention that she once had to stay in the hospital that "Nurse Beth" worked at in the earlier show; in this case, viewers familiar with the earlier show and Alice's role in it will get the reference, but anyone unfamiliar with it likely won't notice that there's even been a reference at all. A more blatant example, however, might be having "Officer Cathy" have to dress up as a nurse to go undercover, only for her to show up dressed exactly like "Nurse Beth", to the point of even repeating Catch Phrases and lines of dialogue from the earlier show. In this case, even viewers unfamiliar with the previous show will likely twig that something is being referenced, even if they don't know the full details.

Casting two or more actors who not only appeared together in a previous production, but spent a great deal of time onscreen together (especially alone) really reinforces the reference, as the page image demonstrates. For added irony value, it often tends to pan out that two characters who famously played friends or lovers will end up playing exes or enemies.

Related to the Shout-Out, and is sometimes triggered by I Want You to Meet an Old Friend of Mine or a Casting Gag, but while a Casting Gag relies upon casting an actor in a role that inherently has many comparisons to their previous roles or real life, an Actor Allusion uses only small details of only a previous plot or role for the actor. In either case, though, if the role being referenced was on a previous version of the show, it's a Remake Cameo.

Contrast with Celebrity Paradox and Meta Casting where the actor themselves is the subject of reference. This is show business' In-Universe way of acknowledging Role Association.

Try to be sure a reference is blatant, specific, or otherwise confirmed by Word of God before committing yourself. Often times, entries are written that merely involve an actor playing the same profession and/or character archetype, which are less likely to be intentional. If, for example, actress Alice plays a cynical Dr. Beth in Work B, and then goes on to play a cynical Dr. Cathy in Work C, that alone is not necessarily this trope. What would be an example is if Alice, as Dr. Cathy, offhandedly uses Dr. Beth's Catchphrase, or strikes an iconic pose that Dr. Beth is known for.