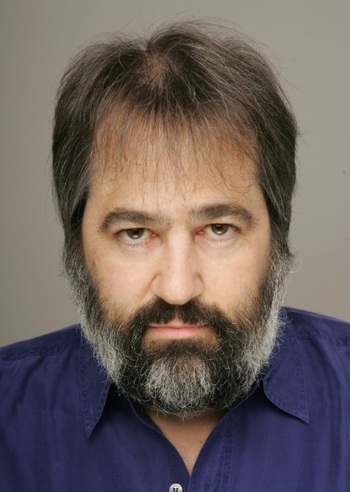 Michael B. "Mike" Pollock (born March 9, 1965 in Roslyn Heights, New York), sometimes credited as Herb Lawrence, is an American voice actor based in New York, where his distinctive voice makes him instantly recognizable. He has appeared as the narrator for 4Kids shows like Pokémon and some promos on the original Fox Box and 4Kids TV. He is also well-known as the current voice actor for Dr. Ivo "Eggman" Robotnik in the Sonic the Hedgehog series. He has also become somewhat of a part of the New York-based Wadjet Eye Games' Production Posse.

He is known for being genial and open with his fans. While the majority of the 4Kids Sonic cast is fairly secluded, Mike Pollock has conducted a number of interviews for those who have approached him. It is likely helpful to his friendly nature that he has avoided much of the backlash his colleagues, such as Jason Griffith, have received.note This is partially attributed to the fact that two of Eggman's previous actors, Deem Bristow and Long John Baldry, are dead

As of 2010, the majority of the Sonic the Hedgehog voice cast was replaced

, with the sole exception of Mike, as Sega felt that none of the other auditions could match his impression of Eggman.