Anime / Pokémon: I Choose You! 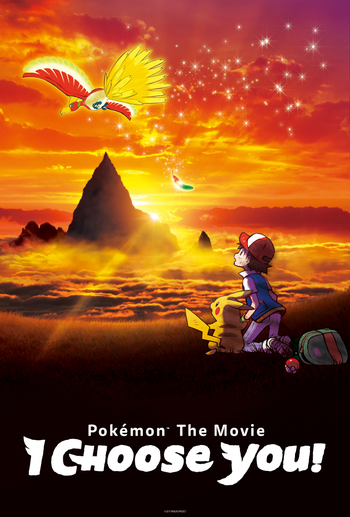 Aim to be a Pokémon Master...and gotta catch 'em all.
Advertisement:

Pokémon: I Choose You! is OLM Incorporated's 20th Pokémon: The Series film, the last to be directed by Kunihiko Yuyama, and the first to be written by Shoji Yonemura. It was released on July 15, 2017.

In a departure from the previous movies, this movie is a loose retelling of Ash's original journey through the Kanto region in an Alternate Continuity, in celebration of the Pokémon anime's 20th anniversary.

Followed by Pokémon: The Power of Us, a direct sequel set in this film's continuity.

I Choose You! provides examples of:

Pikachu speaks actual words, telling Ash that he will always be with him forever - PokÃÂ©mon the Movie I Choose You!

Pikachu speaks actual words, telling Ash that he will always be with him forever - PokÃÂ©mon the Movie I Choose You!