Japanese Title: Pokémon! I Choose You! 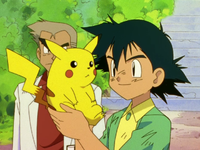 This is where a boy and his pet first met.

We all know the episode. It is young Ash Ketchum of Pallet Town's tenth birthday, and for this momentous occasion he is allowed to pick a starter Pokémon and start his journey to become a Pokémon master. However, on the day that he is due to pick his Pokémon he wakes up late and ends up getting to Professor Oak's laboratory after all the other Pokémon have already been picked. However Professor Oak sympathises with the young boy and lets him pick the dangerous fourth starter Pokémon - the electric type Pikachu with a shocking personality.

After getting his Pokédex Ash slowly begins his journey, but unable to control his Pikachu in any way who seems to find humour in his ineptitude. He attempts to catch a Pidgey but fails - after all has no co-operative Pokémon to weaken it with. As he attempts to capture another Pidgey, he accidentally angers a Spearow which calls for the rest of its flock and chases Ash and Pikachu en masse. They get dragged into a river by accident along the way and are pulled out of the water by a girl fishing for Pokémon. She advises Ash to take his Pikachu to the nearby Pokémon Center in Viridian City but steals her bike to get there quicker.

While racing towards the Pokémon Center in Viridian City they are caught up by the Spearow flock again and a storm begins - eventually Pikachu leaps into the air and roasts all of them with its Thunder Shock, saving it and its trainer's life, but only after Ash had proven himself worthy to his disobedient Pokémon. After the storm has cleared and the flock has dispersed, a shimmering golden mysterious Pokémon flies through the sky, bringing a rainbow with it. Although the Pokédex is unable to identify the Pokémon, Ash decides to struggle on to Viridian City and save his Pikachu.

And the journey continues.