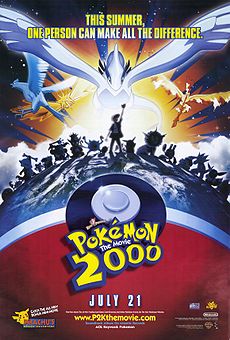 No, it isn't the 2000th movie.
Disturb not the harmony of Fire, Ice, or Lightning,
Lest these Titans wreak destruction upon the world in which they clash.
Though the Water's Great Guardian shall arise to quell the fighting,
Alone its Song will fail. Thus the Earth shall turn to Ash.
— The opening lines of the prophecy, Pokémon: The Movie 2000
Advertisement:

Pokémon: The Movie 2000: The Power of One, commonly shortened to Pokémon 2000 and also known as Pocket Monsters Revelation - Lugia in Japan, is the second Pokémon: The Series film, released on July 17, 1999. It was once again directed by Kunihiko Yuyama and written by Takeshi Shudō. Unlike Pokémon: The First Movie, this is the first one not to suffer from horrible amounts of Bowdlerization.

A collector, Lawrence III, plans to capture the three Legendary Birds—Moltres, Zapdos, and Articuno—in order to collect his prize, the Beast of the Sea. The initial capture of Moltres begins to throw the balance of nature out of order as the remaining birds begin vying to expand their power, just as legend had foretold.

Said legend has become the center of an annual celebration on Shamouti Island, where Ash, Misty, and Tracey are roped into taking part in the climactic ritual journey to obtain the three treasures associated with each of the three elements. The paths of Lawrence and Ash intersect and soon a great battle erupts to prevent one man's obsession from throwing the planet into chaos.

This movie marked the franchise-wide debut of the Pokémon Lugia, the only one in the series to be designed by Shudo. Initially intended to be a film-exclusive character, Lugia wound up being incorporated into Pokémon Gold and Silver in the movie's wake.