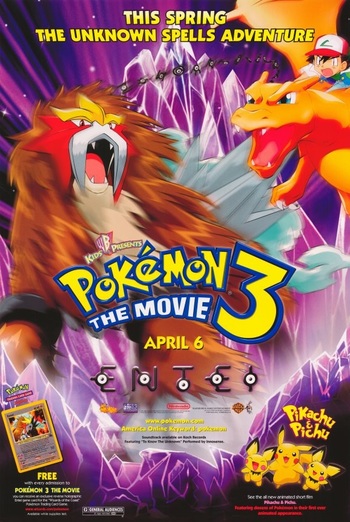 What do a volcanic lion and the alphabet have in common? This film.
Advertisement:

Pokémon 3 the Movie: Spell of the Unown, known as Pocket Monsters: Lord of the Unknown Tower in Japan, is the third Pokémon: The Series film and first film in the Johto arc, released on July 8, 2000. It was directed once again by Kunihiko Yuyama and written by Takeshi Shudō and Hideki Shirane. It was Shudo's last Pokémon film before his death in 2010.

During a discovery in some far-off ruins, Professor Spencer Hale is sucked into the realm of the Unown, who then appear to his young daughter Molly. The Unown make Molly's wishes come true, and the Pokémon transform the mansion into a crystal palace, and create an Entei to replace Molly's father.

Meanwhile, Ash and his friends arrive at Greenfield, and they are caught up in the mission to save Molly. However, it gets worse, as Ash's mother, Delia Ketchum, is kidnapped by Entei in order to have her as Molly's mother. Now Ash, Misty, and Brock must not only save Molly, but Delia as well.

For 18 years, this was the last Pokémon film to score a wide release in North America, after disappointing at the box office. The fourth and fifth films settled for limited releases (and under Miramax instead of Warner Bros.), while all the rest have gone straight to video or TV. However, this film is currently the fifth highest grossing anime film in North America. In 2019, the franchise finally made its return to wide cinemas in North America with Pokémon Detective Pikachu, with Warner Bros. once again distributing.

Released with Pikachu and Pichu.