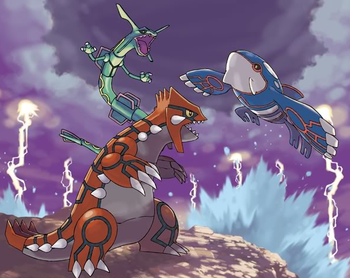 This is a form of Elemental Rock-Paper-Scissors, in which the three elements of Earth, Water and Air are made a trinity.

Land is usually depicted as steady and stable, Sea as unpredictable, and Sky as free spirited. Land may also involve death because of burials, and sky will often be the "king," especially in works created before human flight, since no matter where you are, you're always under the sky.

Sea is usually depicted as the most hostile of the three; considering most of the time humans are at sea, they're on a pretty small (relatively speaking) ship, and at the mercy of the extremely unpredictable sea, which could decide to throw storms, whirlpools, tsunamis and other unpleasant things at you at any moment, this is hardly surprising.

In an Elemental Rock-Paper-Scissors setting, expect Sea to overcome Land,note The seas will wear away even the toughest landscapes Land to overpower Sky,note Land blocks the wind and can withstand whatever the sky throws at it and Sky to defeat Sea.note The waters of the sea are easily tossed around by the sky's winds and storms

These are considered to be the three classic Theatres of War, each with its own branch of the military (Army, Navy, and Air Force respectively) specialized to fighting in it.

See also Four-Element Ensemble (where Fire comes out to play along with this trope) and Fire, Ice, Lightning, another common elemental trio, and also Fire, Water, Wind if Earth is swapped with Fire. Sub-Trope of Power Trio.