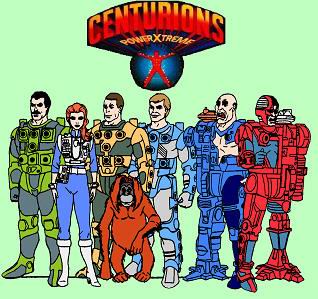 Left to right: Max, Crystal, Jake, Lucy, Ace, Hacker and Terror.
"In the near future, Doc Terror and his cyborg companion Hacker unleash their forces to conquer Earth! Only one force can stop this evil: a handful of brave men. In specially created Exo-Frames, they can be transported anywhere to fuse with incredible assault weapon systems beamed down from the space station Skyvault, becoming man and machine, Power Xtreme! Max Ray, brilliant Sea Operations commander! Jake Rockwell, rugged Land Operations specialist! Ace McCloud, daring Air Operations expert! Whatever the challenge, they are ready — the Centurions!"
—The Opening Narration
Advertisement:

Centurions is a heavily Merchandise-Driven 65-Episode Cartoon series, produced by Ruby-Spearsnote and animated by an uncredited Sunrise, who established their Studio 7 branch (of s-CRY-ed and the Brave Series meta series) with this show in 1986 and based on a Kenner action figure line. It follows the adventures of three (later five) technological Superheroes who fight against evil using Assault Weapon Systems. Their uniforms, actually cybernetic Exo-Frames, had a number of hardpoints on the surface, to which the various parts of their weapon systems would attach after having been beamed in from the orbiting space station, Skyvault.

The three original heroes are:

Rex and John were introduced late in the series; they were intended as additions to the (mostly unproduced) second year of the toy line.

Reasonably notable for being one of Cartoon Network's early staples when they were just starting; it aired soon after school let out, leading to a fair few grade schoolers watching it in the mid-90s and the show getting a minor return to fame, although not enough to lead to being Un-Cancelled. Centurions has also played on Cartoon Network's sister network Boomerang.

The series now has a character sheet.

As of 2021, Ramen Toys is attempting a pre-order revival of the line for adult collectors called 80s Commanders

. Although the characters and weapon systems are similar to the originals, the names and backstories have been changed.