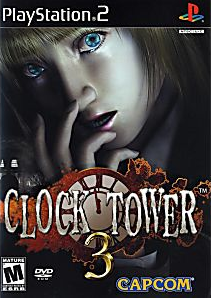 The fourth and last installment (as of now) in the Clock Tower series, which was co-developed by Capcom and Sunsoft, and released in 2002 for PlayStation 2.

You play as Alyssa Hamilton, who after receiving a foreboding letter from her mother, returns home to find her missing. Her investigations on the matter start sending her into different time periods, where she has to confront a variety of evil entities, and possibly her ultimate fate.

Unlike past games, Clock Tower 3 plays more like a classic Resident Evil game rather than a point-and-click adventure, and changes the series' tone from supernatural gothic horror to Cosmic Horror with fantasy elements.

The game was not developed by Human Entertainment due to its dissolution in the year 2000, instead it was developed by Sunsoft and published by Capcom.