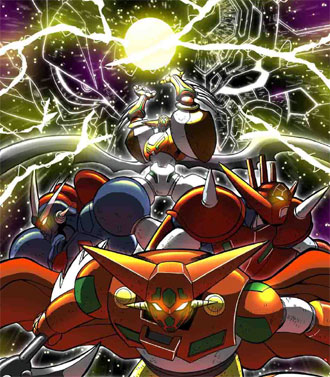 The pinnacle of evolution is... universal domination.note From front to back: Getter-1, Getter Dragon, Getter Go, Shin Getter-1. Background: Getter Āḥ (left), Getter Emperor (right)
"Looks like the only ones who can pilot Getter Robo are either superior pilots... or insane!"
—Hayato Jin
Advertisement:

A classic Humongous Mecha manga, created in 1974 by manga author Ken Ishikawa, who had previously collaborated with Go Nagai in the production of his smash-hit series Mazinger Z. Where Mazinger pioneered the concept of a Humongous Mecha piloted by a human, Getter Robo effectively created the Combining Mecha with its title machine, which required its three pilots to work in harmony in order to function at its best. Its three component jets can quickly separate and recombine mid-combat, producing different specialised forms depending on which pilot takes the lead of the formation - the red Getter-1 (a well-balanced machine with Flight, an axe weapon and energy attacks), the white Getter-2 (a sleek form with amazing speed and a large drill used for both tunnelling and piercing armour), or the yellow Getter-3 (a heavily-armored Tank-Tread Mecha armed with missiles and Extendable Arms).

Five arcs of the manga were created before Ken Ishikawa's death in 2006 - the original, G, Go (created after a 17-year time gap), Shin and Āḥ - which were later edited into a compilation edition titled Getter Robo Saga. Though they all form a single coherent continuity, there is also a significant Time Skip between them, and each series is vastly different in tone, technology level and setting, usually involving the next generation of Getter Robo pilots. In the thirty years since its creation, Getter Robo has also had a number of spinoffs and alternate tellings, which, while not direct adaptions of the manga, usually feature the same characters but in different storylines and settings.

All major installments in the franchise

It's a common misconception that the Getter Robo series is the work of Go Nagai; in truth he only pitched the concept of combining jets (as opposed to combining cars, the original idea) to Ishikawa, while the rest was made without his involvement. Nevertheless, Getter Robo is now closely linked in the minds of people who think about that sort of thing with Nagai's Mazinger trilogy. Do note that Getter Robo IS considered part of the Dynamic Publishing family, so its crossovers with Go Nagai's robots have pseudo-canonical status. That, and most super robot fans LOVE having those robots mix it up.

See also Tengen Toppa Gurren Lagann, a Spiritual Successor series written by one of Ishikawa's editors after his death.