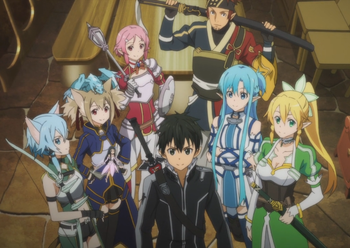 Come on girls, let's go kick some ass! note  And yes, that other guy is part of the harem.
Risa: A forest fairy, a dark demigod, and a brilliant mage. Which do you like best? I'd guess the elf, based on the looks.
Itami: Yeah.
Risa: Personality-wise, the black goth girl.
Itami: Yeah.
Risa: And the platinum blonde makes you want to protect her, maybe?
Itami: You sure know me.
— Gate, "Despair and Hope"
Advertisement:

A subtrope of the Harem Genre, where the male lead has a harem of potential love interests, all of whom are some sort of Action Girl. Sometimes the harem may appear in a form of Hero Secret Service or as an Amazon Brigade. They might also be Bodyguard Babes.

Because this is a more action-oriented subgenre, Battle Harems are less likely to be focused on romance, but still provide plenty of fanservice. Often this appears in the form of a Supporting Harem, though a Balanced Harem form is possible.

Often a Themed Harem, with all the girls having a shared origin and/or character tic/type, but not always. See also Battle Couple and Amazon Chaser. If the hero gets power from his harem, see Harem-Powered. If the story is more about the girls than him, he may just be either The One Guy or an Escort Mission.