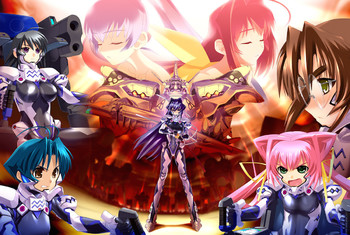 Stand forth and dance nobly /
O warrior who has accepted your destiny!
A destiny tossed about in an insane world—
A flame of life blazing forth in a dying world—
And now, one more future that is spun—
This is the alternative ending unable to be told before:
A very great, a very tiny, a very precious,
Tale of love and courage.
Advertisement:

Muv-Luv Alternative is the final part of the Muv-Luv Visual Novel trilogy.

Following the disastrous ending to Muv-Luv Unlimited, with humanity evacuating the Earth, Takeru once again finds himself reawakening in the same world on the same day 3 years ago with one crucial difference: He remembers what happened in Unlimited and has all his physical training. With a grimmer mindset than before, Takeru instantly approaches Yuuko and declares his support of her program, Alternative IV; trading information of the 'future' for information on Alternative V and a bigger role in her project.

Of course, one thing that didn't carry over was Takeru's rank, so he has to begin again in basic training. This time however, he is physically fit and mentally ready and he and the squad breeze through their former obstacles. Throughout the early parts of the story, Takeru does his best to move events forward and get promoted to a position with some measure of authority to it as quickly as possible. While hurrying the rehash of Unlimited along, Takeru also acts in ways differently than he had before, hoping to introduce changes into the timeline. Sure enough, he succeeds and a brand new story begins. This time, however, there is an inescapable deadline to stop the BETA before Alternative V goes into effect.

Created and co-written by âge's Yoshimune Kouki, Alternative is the most highly-regarded part of Muv-Luv, and widely-considered to be among the very top visual novels ever released. It relies on the setup of the two previous stories to begin exploring the setting and using the characters for a much grander, more dramatic effect. In stark contrast to the prior arcs, Alternative is an exceedingly dark story full of political intrigue, glory, death in battle and much greater stakes. How can Takeru's actions possibly lead to the peaceful, victorious future he dreams of?

to fund an official English localization of Alternative and its prequels Muv-Luv Extra and Muv-Luv Unlimited. Within less than a day, âge achieved their funding goal of $US 250,000. The campaign concluded on November 4th, 2015, having exceeded the target amount by more than $US 1,000,000. A manga serialization ran in Dengeki Daioh up to June 2017. The official international edition of Alternative was released on Steam on September 19, 2017. Finally, that an animated adaptation of Alternative is in development was announced on October 22, 2019; the adaptation's first season, animated by Graphinica and Yumeta Company, aired as part of the Fall 2021 season, with another season airing in Fall 2022.

So how many times do I have to repeat myself? An awkward hero saved this world.
Stumbling, crying, fighting stubbornly for so long, such a bratty hero.
And it's funny: Everybody went along with him knowing nothing, and even after learning the truth they still did... Well, I was one of them too.
Geez, we really were idiots.
...Guess it's useless talking further with you uncultured swine.
-Yuuko, under interrogation post-Operation Cherry Blossom