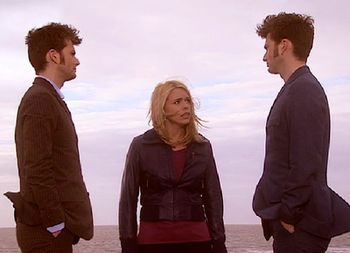 Close enough.
"Earth. After the War. Three years have passed since I saw your face. I wonder if I come to you, at night, in dreams; in the day, as memories.
"Do I haunt your hours, the way you haunted mine? And I wonder if you see me, when you look at her?
"If we have souls, they are made of the love we share; undimmed by time, unbound by death.
"For three years I searched for the house he built. I knew it had to be out there. Because I know him. I am him. I am Jack Harper, and I'm home. "
— Final lines of Oblivion
Advertisement:

So the protagonist is forced to part with a love interest. But it's okay! Because at the end of the story they meet a doppelgänger who happens to look exactly like the person they lost for fantastic (supernatural/fantasy/science fiction) reasons.

Usually, the new love interest has been relationship-free for some time, or just got out of a long term relationship.

If time travel is involved, the love interest in the present is often an identical grandson or grandfather, which also makes for some incestuous implications if you assume they get married and have babies.

Not to be confused with Replacement Goldfish. Note that this trope only applies when the new love interest appears by devices not possible in the world as we know it, such as magic, parallel universes, time travel, or cloning. If there's a mundane explanation (or none) for the Suspiciously Similar Substitute, that's plain old Replacement Goldfish. See also Doppelgänger, obviously.

See Settle for Sibling for when the old and new love interests are twin brother/sisters and Doppelgänger Gets Same Sentiment for examples of the same concept that don't necessarily involve romance.

Due to the nature of this trope and its close association with Death Tropes, spoilers are likely.