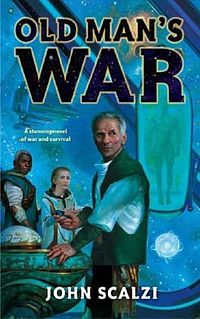 "I did two things on my seventy-fifth birthday. I visited my wife's grave. Then I joined the army."
— John Perry
Advertisement:

it was adapting the books into a television series called The Ghost Brigades (it still will begin with John's story from Old Man's War, they just thought the name sounded cooler). In 2017, Netflix announced