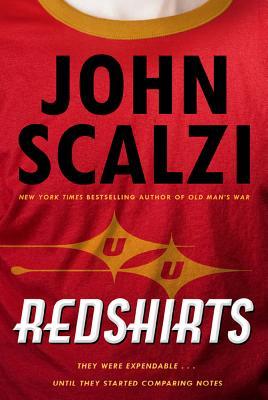 It's gonna be a bloodbath.
Maia Duvall: Within five minutes of getting to my new post I heard three different stories of crew buying the farm on an away mission. Death by falling rock. Death by toxic atmosphere. Death by pulse gun vaporization.
Jimmy Hanson: Death by shuttle door malfunction.
Andy Dahl: Death by ice shark.
Advertisement:

Redshirts is a Hugo Award-winning novel by John Scalzi which takes the concept of the Red Shirt, examines it, deconstructs it, and tears it inside out, taking an in-depth look at what would happen if the eponymous expendable extras ever discovered why the universe treats them as its own personal Chew Toys.

Ensign Andrew Dahl, fresh out of the Academy, has received his first assignment on the Universal Union’s flagship, the Intrepid. His excitement at this very prestigious posting quickly wanes as he discovers something odd about his new ship. His shipmates seem terrified of Captain Abernathy and his senior officers, and do everything in their power to avoid the dreaded "Away Missions." Ensign Dahl’s suspicions come to a head when a mysterious figure approaches him in the corridor and warns him to "avoid the Narrative."

Redshirts is very trope heavy, and many of them are Played With, Parodied, Lampshaded, Zig Zagged, Subverted, or Double Subverted. Naturally, the examples below contain many spoilers, so tread carefully.

The book even has its own theme song

, written by Jonathan Coulton, no less.

In February 2014, a television adaptation

of Redshirts was announced. (We'll wait while you untangle the levels of meta involved at this point.) However, it seems to have since fallen through.