Friend in the Black Market 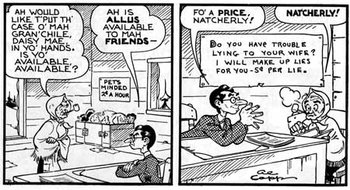 Always happy to do a favour for his friends. For a price, naturally.
Andy: I understand you're a man who knows how to get things.
Red: I'm known to locate certain things from time to time.
—The Shawshank Redemption
Advertisement:

You're in a sticky situation; you need to get something and there doesn't seem to be a legal way of getting it. (It could be banned, rationed, from overseas or possibly just made in extremely limited quantities). If you're lucky, you'll have a friend in the Black Market.

These guys are the real deal, never dealing in substandard goods because that wouldn't be good business practice and they rely on their reputations. They don't ask any questions either. Their main vice is that they're going to ask for a fair bit more than what the item is worth. Their defense for this is often that it's the circumstances and the effort to get the items that makes them charge the prices, but often it's also a bit of avarice too. (Which often makes them Mr Vice Guys.)

Personality wise, like Honest John, they can fit anywhere into the Character Alignment spectrum. (Although the fact they deal in quality products usually puts them at least chaotic neutral.) If the character is part of the hero team, then they'll usually be Chaotic or Neutral Good. In a war situation, they also tend to screw it and party, unless the action is centered on the military in which case they'll be doing this work on the side.

This character is obviously part of the Black Market. Compare and contrast Honest John's Dealership, who also sells products at a premium... except theirs are of lesser quality. The Scrounger is likely to either be this trope or to have dealings with him. Also compare and contrast Friend on the Force, for a helping hand on the less dubious side of the law.

The Slave Merchant of Castle Town, whom Naofumi bought both Raphtalia and Filo's Egg from. The only person that Naofumi could count on when he was down on his luck after he was made a Pariah at the start of his journey.

Alternative Title(s): I Know A Guy

The Slave Merchant of Castle Town, whom Naofumi bought both Raphtalia and Filo's Egg from. The only person that Naofumi could count on when he was down on his luck after he was made a Pariah at the start of his journey.