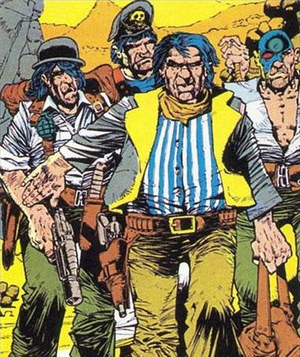 The family that slays together stays together.
"The last of our steers on the board has been spread,
And the last flask of wine in our goblet is red
Up up, my brave kinsmen! belt swords and begone,
There are dangers to dare, and there's spoil to be won."
— Sir Walter Scott, The Foray
Advertisement:

Sometimes crime is a family business even when the family doesn't live in an urban environment. This clan or extended family lives in a rural or wilderness area, away from civil authorities, and makes a living by either robbing passers-by or traveling to raid farms, manors, and villages. This can extend to 'protection' schemes similar to those used by urban criminal organizations, but otherwise there is little overlap in their activities. Like The Mafia, these groups tend to be strong practitioners of blood feud, and unwilling to involve outside authorities in their disputes.

These groups are rare nowadays, as there are very few areas left sufficiently lawless to sustain them, but they can appear in historical fiction, fantasy, and any type of science fiction that involves the Final Frontier. They tend to have a warrior culture that honors strength, cunning, and ruthlessness, and tend to be big fans of cattle theft, as well as a good old fashioned Rape, Pillage, and Burn. While the family business isn't usually murder specifically, they aren't shy about killing anyone who stands in their way (or annoys them, or looks at them funny...), so many will have elements of an extended multi-generational Family That Slays Together. They may well be a Badass Family as well, when the outright criminality of the lifestyle is downplayed or because Evil Is Cool. They are usually land-based, but seagoing and spacefaring pirate clans also fall under this trope.

Subtrope to The Clan. Compare The Mafia, Barbarian Tribe, Damn, It Feels Good to Be a Gangster!, Generic Ethnic Crime Gang, Wretched Hive (where these clans often reside). Particularly depraved and horrific examples may overlap with Cannibal Clan.