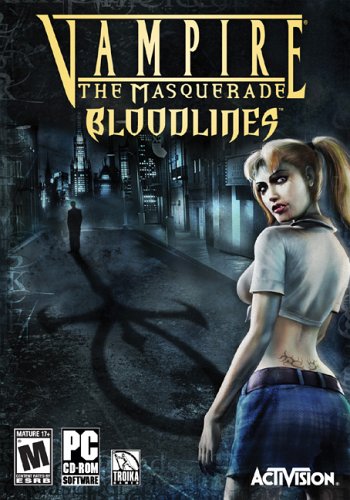 "Hurry up, I can only amuse myself for so long..."
"Life is a splendid thing to indulge in! A pity we're dead..."
— Beckett
Advertisement:

Vampire: The Masquerade — Bloodlines is the final game made by Troika Games, composed of the Black Isle exiles responsible for Fallout and Arcanum: Of Steamworks & Magick Obscura. It was released on November 16th, 2004, the same day as Half-Life 2. An FPS/RPG hybrid, many consider it the worthiest successor to Deus Ex. A World of Darkness MMO was being developed by Crowd Control Productions based on the Old World of Darkness which was to start out exclusively focused on Vampire: The Masquerade, but this was, sadly, eventually cancelled.

The game takes place in the Old World of Darkness. In the Anarch-controlled city of Los Angeles, the player character is a newly-Embraced vampire... and it would seem an illicitly-embraced one, as well. After their sire gets offed for Embracing a mortal without the permission of LaCroix, the newly instated Camarilla Prince of Los Angeles, the PC finds themselves trying to prove their worth by becoming LaCroix's errand runner. They become embroiled in local vampire politics and meet a wide cast of characters in their quest to track down an ancient sarcophagus.

Bloodlines was also the first game to make use of the licensed Source engine from Valve Software and was technically the first Source engine game completed, but part of their licensing agreement prohibited the game from being released before Half-Life 2.

Thanks to a very Troubled Production, the game had the makings of an Obvious Beta when it was released, suffering from numerous critical bugs and other problems, and although quite a few were fixed by patches, Troika went under shortly after the release, resulting in many of them remaining unaddressed (though some employees did stay on, unpaid, to put out a single official patch to squash some of them). Luckily, a small dedicated modding community around the game has fixed most of these over the years through Unofficial Patches

Despite the Obvious Beta aspects, many consider the game to be an incredibly fun, deeply rewarding experience that any fan of PC-RPG's like Deus Ex would enjoy. So much so that the games community is still active to this day, and is always embracing new players who display an interest in the game.

Bloodlines received a true Spiritual Successor in Vampire: The Masquerade — Night Road in 2020. If you're looking for a similar, non-Vampire game, look at Alpha Protocol.

In 2015, Paradox Interactive bought out White Wolf, thereby obtaining the rights to the World of Darkness universe. In 2017, Paradox acknowledged that they are well aware of Bloodlines's popularity, and stated that making a sequel of sorts at some point was definitely not out of the question. In March of 2019, it was revealed that development on Vampire: The Masquerade – Bloodlines 2 is underway, but it has no set release date.

open/close all folders
A-D
immortal, and as they were not directly Embraced, they had no inherent clan related weakness. Later, wishing to be recognized as a proper Clan, Tremere committed the ultimate vampire taboo and diablerized the Antediluvian Saulot, thereby becoming an Antediluvian himself, and thus elevating the Tremere to Clan status. The Tremere ran a smear campaign against Saulot and his descendants, Clan Salubri, claiming them to be soul-stealers in order to justify diablerizing Saulot, and hunting them into near extinction. Unfortunately, these deeds made other vampires view the Tremere as evil usurpers who basically cheated and muscled their way into power.
E-H
I-L
M-P
Q-T
U-Z
"Remember, wherever we go, it is the blood of Caine which makes our fate. Farewell, vampire."
Feedback