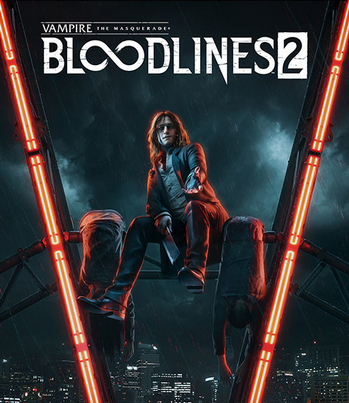 Come dance on your grave.
"Welcome to the first day of the rest of your death. Having fun yet?"
— Dale Telley
Advertisement:

Vampire: The Masquerade — Bloodlines 2 is the upcoming sequel to 2004's Vampire: The Masquerade – Bloodlines, originally in development by Hardsuits Labs and published by Paradox Interactive. Quite a few of the developers on the original game, most prominently designer and writer Brian Mitsoda and composer Rik Schaffer, have returned for this game. The game additionally features Cara Ellison as writer.

Fifteen years after the events in Los Angeles, on a foggy night in Seattle, vampires swoop down from the rooftops in Pioneer Square and conduct a mass embrace, converting a group of humans into so-called "Thin-Bloods." It's a dangerous and illegal act, forbidden by vampire society under threat of death-for both the sire and the victim. Abandoned to the world, these bewildered and naïve Thin-Bloods threaten the Masquerade, the elaborate social pact that prevents humans from finding out about vampires.

As one of these Thin-Bloods yourself, you're captured and brought to trial. Wheeled before a council of the governing vampire clans, you're asked to recall the events of that night in Pioneer Square, and thus expose the culprits behind this terrible deed. Your reward for cooperating? Execution. Except it all goes wrong. The trial implodes as the council members squabble amongst themselves, and an unexplained fire breaks out and engulfs the room. You take the opportunity to flee into the night, resolving to try and uncover who did this to you, and why. If you’re lucky, you’ll survive long enough to find out.

The game is due to be released on Microsoft Windows, Xbox One, Xbox Series X|S, PlayStation 4, and PlayStation 5.

Originally announced for release in March 2020, the game was delayed early that year, with a new release window sometime in 2021. In February 2021 it was announced that the game was being delayed again, with the only confirmed information being that it now won't release in 2021. In the same announcement, it was revealed that Hardsuit Labs are no longer heading up the project, and that the remaining work will be headed by another (as yet unnamed) developer.