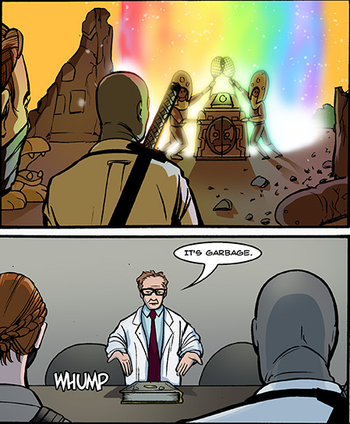 Gutman: Fake. It's a phony! It's lead! It's lead! It's a fake!
Cairo: You. It's you who bungled it. You and your stupid attempt to buy it! Kemidov found out how valuable it was! No wonder we had such an easy time stealing it! You... you imbecile!
— The Maltese Falcon
Advertisement:

Our heroes have found a golden helmet, a powerful relic, or magic sword, something of great value, they take it to get appraised only to discover that it's actually... junk.

A hapless man finds a briefcase, locked, in the back of his car. Perhaps it is full of money, secret documents or contraband. When he opens it he discovers... it's full of shredded paper.

An object of absolutely no significance that the protagonist mistakes, either through misunderstanding or excited imagining, as something of great importance, be it a magic sword or mysterious briefcase. Since a MacGuffin is usually defined not by what it can do, but by what people think it can do (and how much they are willing to do for it), a MockGuffin can still drive the plot even though all it turns out to be is completely worthless.

Compare with It's All Junk, Worthless Yellow Rocks. Not to be confused with All That Glitters or It's the Journey That Counts, which are often materially worthless but at least impart a valuable lesson. See A MacGuffin Full of Money for a plot device that can end in this. If someone deliberately creates a duplicate MacGuffin, that's Fakin' MacGuffin.

Its opposite is Grail in the Garbage, where a seemingly worthless object is in fact worth a king's ransom.